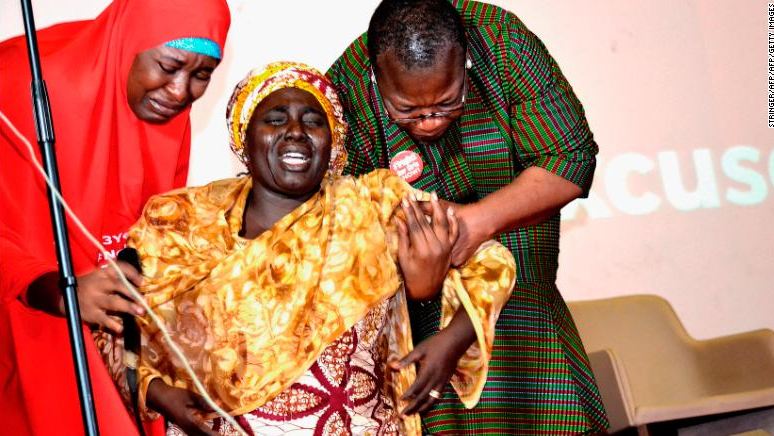 Yana Galang and three other mothers of the missing Chibok girls, after a meeting to discuss the fate of their daughters. You can now watch Daughters of Chibok along other films from the Venice VR official selection from September 8 to October 8, 2019 on the VRrOOm XR app (Apple App Store / iOS – Google Play / Android / Daydream – Oculus store / Oculus Rift, Oculus Go, Samsung Gear VR – Viveport / HTC Vive).

Lagos, Nigeria (CNN)A documentary by a Nigerian filmmaker on the missing Chibok girls has won an award at the Venice Film Festival.

The documentary, which also had its premiere at the festival, tells the story of Yana Galang, whose daughter was among the 276 girls kidnapped in April 2014 from their school dormitory in Chibok, northeast Nigeria.

When the Chibok girls were kidnapped, there was global outrage, Pakistani activist Malala Yousafzai called them her “sisters.” Then US first lady Michelle Obama, said she saw her “own daughters” in them and Hollywood stars lent their voices to the movement.

Following government negotiations with the terrorists, 107 of them were eventually released. But 112 remain missing.

The film’s director, Joel Kachi Benson, said in his acceptance speech: “With this VR film, all I wanted to do was to take the world to the women of Chibok, who five years after their daughters had been kidnapped, are still living with the incredible pain of their absence. I felt it was wrong for us to forget or even doubt and move on.”

Benson, who runs a virtual reality film studios, VR360 in Lagos, Nigeria told CNN: “When my name was announced as the winner and I walked up on stage, it was the most surreal thing ever! Almost like an out of body experience. But I knew this was an opportunity to remind the world that Chibok is still here and the story doesn’t have an ending yet. And so we must not forget.”

Five years on, the world appears to have forgotten and the Chibok story no longer commands global attention. But one mother has not given up hope.

Yana Galang’s daughter Rifkatu is one of those still missing.

Every month, Galang, 51, washes and folds her daughters clothes — praying that she will one day be released.

“Rifkatu my daughter, for five years I have wept and waited, praying for you to return. I will not stop praying for you. I will never stop, and I know that one day my prayers will be answered.” Galang says in the documentary.

Benson, 38, says he stumbled on making the film about the missing girls out of curiosity to find out more about the infamous kidnappings for himself.

“I guess my original reason for making this film was curiosity, I wanted to get the information myself,” he added.

The crew spent several days in the small village in Borno State speaking to families of those affected by Boko Haram abductions.

The end result is an immersive storytelling style that give the audience a chance to feel and see what the characters in the story are experiencing through virtual reality.

“I have always felt like my experiences in the northeast were not fully captured. But the moment I wore a VR headset for the first time, I knew I had found a way to engross people in my stories,” Benson told CNN.

Many of the people in Galang’s community are peasant farmers. These agrarian communities have been ravaged by a decade-long insurgency waged by Boko Haram in Nigeria’s northeast.

They suffer extremely high levels of poverty and deprivation, primarily because farming and commercial activities have been affected by the prolonged and unpredictable attacks by the terrorist group.

Chibok’s farmers are mostly women and not only do they have to contend with poverty; they have to bear the pain of their missing daughters too.

Rebeca Samuel (C), the mother of Sarah Samuel, one of the abducted Chibok girls, breaks down in tears while being helped by Coordinator of Bring Back Our Girls, Oby Ezekwesil (R), and Aisha Yesufu during a lecture in Abuja marking the third anniversary of the abduction in 2017.  You can now watch Daughters of Chibok along other films from the Venice VR official selection from September 8 to October 8, 2019 on the VRrOOm XR app (Apple App Store / iOS – Google Play / Android / Daydream – Oculus store / Oculus Rift, Oculus Go, Samsung Gear VR – Viveport / HTC Vive).

Worse, these women rely on ancient farming tools and methods, which limits the amounts they grow to make a decent living, says Samira Mohammed, associate producer of the documentary.

“They are all farmers, and it’s not easy for them to be grieving and trying to make ends meet at the same time,” she told CNN.

“At some point while we were shooting it (the film). We all broke down in tears; the pain was too much,” she added.

The women have also never received any psychosocial support, something that Boko Haram survivors, including the rescued Chibok girls, have had access to over the years, through organizations such as the United Nations and others.

“One of the most shocking things I found out was that none of the parents had received any form of support since the incident. Not therapy, not psychosocial support, nothing,” Benson said. 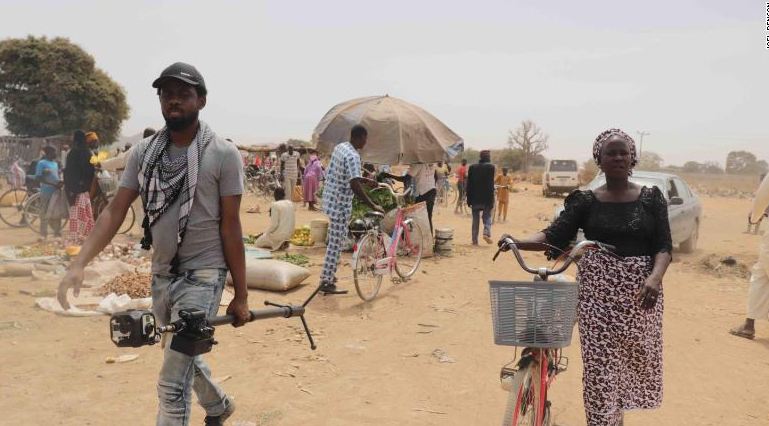 In the documentary, Galang talks about prayer being her primary source of comfort. She is also the woman leader among the mothers of the missing girls. This means that a lot of time she holds meetings and engagements trying to comfort traumatized mothers. 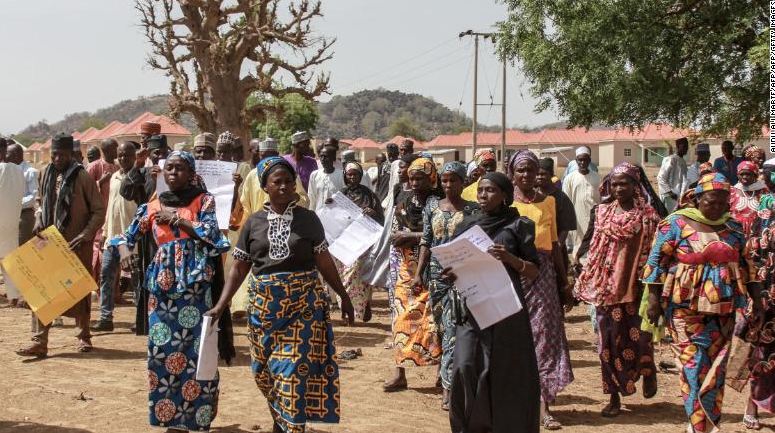 Parents and relatives arrives holding portraits of their girls for a commemoration five years after they were abducted by Boko Haram Jihadists group on April 14, 2019 at the Chibok Local Government.  You can now watch Daughters of Chibok along other films from the Venice VR official selection from September 8 to October 8, 2019 on the VRrOOm XR app (Apple App Store / iOS – Google Play / Android / Daydream – Oculus store / Oculus Rift, Oculus Go, Samsung Gear VR – Viveport / HTC Vive).

Benson wants to use the film to create awareness of the plight of the Chibok mothers who are still waiting for their daughters’ return. They also want to provide modern farming tools to help the women sustain their farms and create a decent standard of living.

“I know it will never replace a missing child, but it will make a hard life just a little easier,” Benson told CNN.